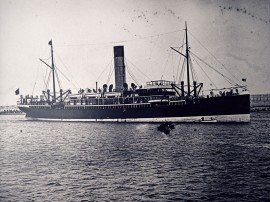 As usual our trip to dive the Yongala ship wreck was sensational, great vis, the usual suspects on the wreck (which is a LOT) and great company. This is the third time we have ventured there in March, it seems to work for us , we have always been really lucky with dive conditions at that time of year.

This wreck lies in sand and does not have any other underwater structures near by, that and the fact that it sits in the path of the discharge from the Burdekin river  into the Coral Sea, it has a MASSIVE amount of marine life on it and around, OMG.

On ONE dive, we dived with huge schools of Barracuda, sea snakes, leopard sharks, bull sharks, giant grouper, bull rays, manta rays, G.T’s,and pretty much everything else you can imagine! ON ONE DIVE!. Palease! And not just fleetingly, we dived with these things for ages.

Oh, and I have to mention the Bat fish, if you have dived there you know what I am talking about, these suckers are the size of platters, they are massive.

For the history buffs there is a lot to research you can get stuck into to build your excitement before the dives, they still do not know why the ship went down, 122 souls lost their lives, there where no survivors, so no first hand accounts of what happened, they have theories but they do not know, people say it was because it was caught in a Cyclone, but there was no cyclone or storm activity that day.

Today it is a grave site and it is illegal to enter the wreck.

We dived this wreck over 3 days one year , on the 100th anniversary of it’s sinking, which is also my birthday (not to the day, haha) which was just after cyclone YASI hit land, it had moved the wreck and some treasure that had not been seen before had spilt out of it’s belly, Pete and I came across a beautiful crystal globe about the size of a basketball, undamaged, pretty excited we called the Museum in Townsville and asked if they wanted us to bring it up, they said yes (yippeee) and we handed it over to them when we docked , it is still being prepared in the museum. That was in 2011, takes a while hey?

Now, some rate this dive site as the numero uno dive site in DA VORLD!

I would certainly say it is up there , each time I have dived it , it has blown me away with the amount of BIG fish and variety. As far as being the best in the world? I couldn’t say, I am still diving the World!! HAHA. 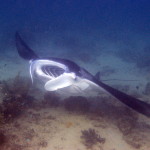